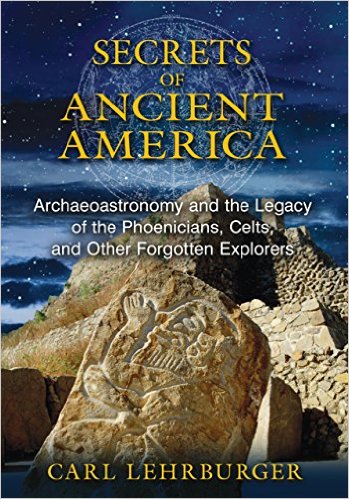 Carl Lehrburger joins us to talk about his book, "Secrets of Ancient America: Archaeoastronomy and the Legacy of the Phoenicians, Celts, and Other Forgotten Explorers". This is part 2 of this talk, and we will get into a little more detail of the evidence of ancient travelers and the work Carl has done on some of these sites. We also talk about Giants and his chapter on them that did not make the book. We go all across the Americas looking an info for various travelers. His website can be found at NewHistoryofAmerica.net.

Sharing his more than 25 years of research and travel to sites throughout North America, Carl Lehrburger employs epigraphy, archaeology, and archaeoastronomy to reveal extensive evidence for pre-Columbian explorers in ancient America. He provides more than 300 photographs and drawings of sites, relics, and rock art, including Celtic and Norse runes in New England, Phoenician and Hebrew inscriptions in the Midwest, and ancient Shiva linga and Egyptian hieroglyphs in the West. He uncovers the real story of Columbus and his motives for coming to the Americas. He reinterprets many well-known archaeological and astronomical finds, such as the Ohio Serpent Mound, America’s Stonehenge in New Hampshire, and the Crespi Collection in Ecuador. He reveals Celtic, Hebrew, Roman, early Christian, Templar, Egyptian, Chinese, and Japanese influences in famous stones and ruins, reconstructing the record of what really happened on the American continents prior to Columbus. He also looks at Hindu influences in Mesoamerica and sacred sexuality encoded in archaeological sites.

Expanding upon the work of well-known diffusionists such as Barry Fell and Gunnar Thompson, the author documents the travels and settlements of trans-Atlantic and trans-Pacific explorers, miners, and settlers who made it to the Americas and left their marks for us to discover. Interpreting their sacred symbols, he shows how their teachings, prayers, and cosmologies reveal the cosmic order and sacred landscape of the Americas.

Carl Lehrburger has studied archaeological and sacred sites in North America, with a focus on ancient Old World peoples in America before Columbus, for more than 25 years. He has published articles in Ancient American magazine. An avid traveler and explorer, he lives in Talent, Oregon.