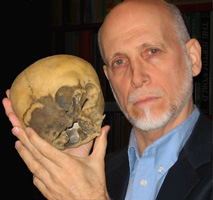 Lloyd Pye is a researcher and author known for his work with the Starchild Skull and Intervention Theory. Lloyd began writing in 1975, then became a screenwriter in Hollywood in the 1980s. In 1995, he found his passion writing nonfiction in Alternative Knowledge.
Lloyd's fields of expertise include Intervention Theory, the origins of life, of human life, of alien reality, of hominoid (bigfoot, yeti, etc.) reality. We talk about...
You can learn more about Lloyd and his work at www.LloydPye.com and www.StarchildProject.com
Rate this item
(0 votes)
Tagged under
Tweet
More in this category: « John Ward on The Exodus Reality and much more... December 28, 2013 Interview with Patrick Harpur, author of Daimonic Reality - July 20, 2013 »