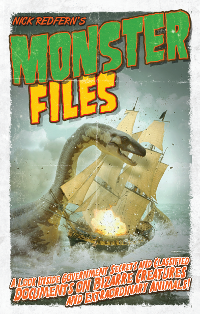 On this night we were joined by one of the most prolific writers on the paranormal. Nick Redfern. We discussed his most recent book, Monster Files: A Look Inside Government Secrets and Classified Documents on Bizarre Creatures and Extraordinary Animals. This book opens long-hidden portals into the mysteries, conspiracies and cover-ups behind secret files in the Pentagon, the Kremlin, the British military and other government entities.
We spoke of the supernatural aspects of Bigfoot, vampires, government experiments, Roswell, UFO's, Men in Black, Black Eyed Children, El Chupacabra, and much, much more...
Redfern is one the world’s most sought-after speakers and media spokespersons on the science of animals whose existence has not been proven (until now) and the existence of animals considered to be extinct. He has appeared on more than 100 radio and TV programs, from the BBC to Fox News, MSNBC and National Geographic.
Monster Files lays out the persistent rumors, tales, and legends that government agencies around the world have secretly collected, and the book reveals a wide variety of hair-raising data on bizarre beasts, amazing animals, and strange creatures. No longer the subject of just folk tales and bedtime stories, Bigfoot, the Loch Ness Monster, sea serpents, psychic pets, the chupacabras, and abominable snowmen have all been sighted, documented and hidden from the public. In his inimitable, entertaining style, Redfern ferrets out this official, ultra-classified information.
Monsters, creepy creatures, and terrifying beasts really do exist––our governments know all about them––Monster Files exposes them. A regular contributor to UFO Magazine, Fate, Mysterious Universe, Nick Redfern is the author of:
* The Pyramids and the Pentagon
* Keep Out! Top Secret Places Governments Don’t Want You to Know About
* The Real Men in Black
* The NASA Conspiracies
* Contactees: A History of Alien-human Interaction
* Memoirs of a Monster Hunter: A Five-Year Journey in Search of the Unknown
* Science Fiction Secrets: from Government Files and the Paranormal
* Celebrity Secrets: Official Government Files on the Rich and Famous
* There’s Something in the Woods
A researcher, consultant and spokesperson on TV, Redfern has appeared on:
* Fox News
* BBC’s Out of This World
* SyFy Channel’s Proof Positive
* History Channel’s Monster Quest
* America’s Book of Secrets
* Ancient Aliens
* UFO Hunters
* National Geographic Channel’s Paranatural
* MSNBC’s Countdown
Check out Nick's Blog at www.nickredfernfortean.blogspot.com for more...
Rate this item
(0 votes)
Tagged under
Tweet