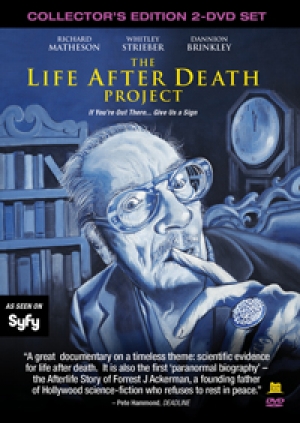 This is a DVD review.

This is a fascinating, and ultimately, compelling piece of work. I've seen mixed reviews of it, and with most things like this, I went in skeptical. By about halfway through, however, I was starting to soften up on the whole thing, and by the end, I think what Paul Davids has here, is rather significant. At the heart of this, is the life and death of Forrest J Ackerman, a huge name in Sci-Fi circles. Ackerman was an Atheist, but said if there was something more beyond death, he would try and communicate back. Forest is not the first to make such claims, Harry Houdini being the most famous, but in that case, the relevant attempt at contact seemed to be primarily a séances at the anniversary of his death. This happened far more spontaneously.

One of the things that has been coming up more and more in this type of research is the role of synchronicity. For those that are not familiar, a synchronicity is a meaningful coincidence. A lot, but by no means all, of the evidence here are synchronicities. To some, that is reason to dismiss this. I think, though, that maybe this is just how it works. Not in some grandiose fashion, with a spectral form screaming out your name, but in the subtle workings of reality. Coincidences happen. But the sheer number of coincidences that would need to be accommodated here to dismiss it is absurd. And these synchronicities revolve around many people, not just Paul Davids.

Beyond that, you have mediums, who communicate very accurate information about Forest without knowing anything at all. You have a fascinating scientific experiment involving light photons and chemical analysis on a mysterious block of ink, which is really where the whole story starts.

Then there is a second DVD, which talks to various people about life after death, not directly related to Forest for the most part, although there are some updates. All in all, if you are looking for some mind blowing, in your face proof of life after death, you will not find that here. If, however, you look at this with an open mind, and with no preconceptions, there does seem to be something significant here. Maybe we have been looking at the Life after Death issue in the wrong way. Maybe it’s the subtle flux’s that we should be paying attention to. In the end, I suppose, it’s personal. The people who these events happened to, know they happened. They present their stories and evidence clearly and concisely. A hardcore materialist will just chock it all up to coincidence or deception, but that is not an honest view of this. An honest view says something odd is happening to these people, and it may very well be explained by Forest J Ackerman communicating with them in his own way.