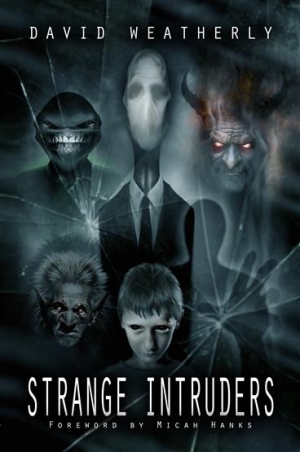 Strange Intruders is David Weatherly's follow up to The Black Eyed Children. In speaking with David, it seems like was supposed to be the first book, but the material for cases of Black Eyed Children being so overwhelming, he decided to dedicate a book to that first. This book, does cover that a little bit more, as their is a chapter on it. David presents some new cases and a few that stand out as different in this book. But that is just one of the many unusual beings and encounters covered by this book.

Starting with the Djinn, then moving into Shadow People, Pukwudgies, Grinning Men, the Slenderman, and much more. You can read about the strange monkey men of India, the mad gassers that unleashed their strange attacks in the early part of the 20th century, and even a bit about the infamous Spring Heeled Jack. There are strange Reptoid encounters, and much more.

Not an excessively long book, just around 170 pages, it is packed full of stories and encounters, including one of his own with a Grinning Man. David sites John Keel as an inspiration, and that is apparent in his writing and work. Well written, and very hard to put down. Highly recommended.

You can order the book through Leprechaun Press.