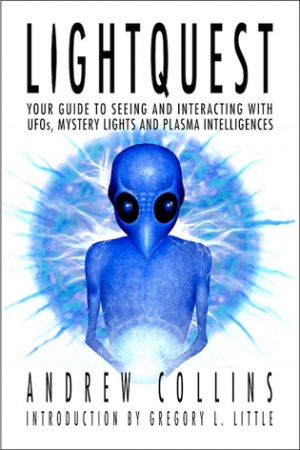 There are plenty of UFO books out there. More than you can probably count. Most of them do not offer anything new, if they offer anything at all. The majority of them are stuck in the extra-terrestrial paradigm. Through the years, there have been books in the field that stand out, notably the work of people like Jacques Vallee, John Keel, John Mack, Whitley Strieber, etc. The people who were willing to try and truly understand the phenomenon.

I believe that Lightquest from Andrew Collins belongs on that list. Is it the definitive book that clearly explains everything? No. We may never have that. But this book, may very well be a step in the right direction. Expanding primarily on the work of another novel researcher, Paul Devereux, Andrew proposes that what we see as space ships, fairies, etc, are really plasma formations. This is not a new idea, although it is not a well known theory, where Collins differs, is he proposes a definite intelligence behind the phenomenon. He suggests a combination of altered states of consciousness, and what he calls a 'bubble reality' to explain what is happening to people who come in close contact with these plasma intelligences. He starts the book by debunking Roswell, the flagship of the ET Hypothesis. Following that, he explores areas that have earth lights, probable plasma formations, that show up regularly, such as Marfa, Texas. He then takes it deeper into UFO territory and explores encounters and how strange they really get. He deals with cutting edge science to try and understand what we may really be experiencing, rather than what it looks like on the surface.

Like all of his books, he shares information you will not find anywhere else. He shares some personal accounts and some never before published accounts that support his theory. He even, at the end, takes a look at the Rendlesham case.

All throughout, as he explores 'window areas', UFO hotspots, and why they may be such, he also gives you tips if you wish to visit them yourself, and where you are most likely to see something. Personally, I have been a fan of Andrew Collins for a long time now, and the majority of his books have had to do with archaeology and lost civilizations, but there are a few exceptions, like this. He has never disappointed me. He always has something worthwhile to share when he authors a book, and with the number he has out, that is quite impressive. This one is around 400 pages, detailed, well written, easy to read, and just packed with information. There is even a brief Q&A section at the end just to clarify some of the points in the book.

If you are at all interested in the UFO Phenomenon, you owe it to yourself to read this book. Even if you disagree with his overall theory, I can almost guarantee you will get something out of it of value.

You can find out more about Andrew Collins at his official website.